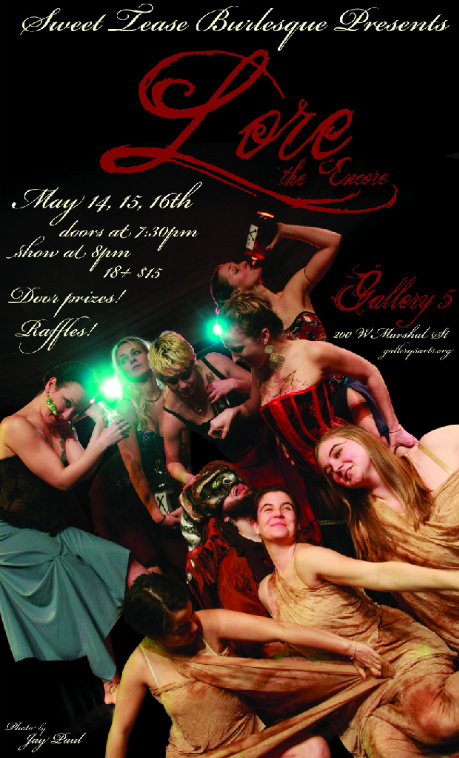 Once was clearly not enough. After a record, sit ‘em down, squeeze ‘em all in, turning people away from the door, turnout for their premiere performance of  Lore, Sweet Tease Burlesque returns to the stage with a demanded three night encore at Jackson Ward’s illustrious Gallery5.

Once was clearly not enough. After a record, sit ‘em down, squeeze ‘em all in, turning people away from the door, turnout for their premiere performance of  Lore, Sweet Tease Burlesque returns to the stage with a demanded three night encore at Jackson Ward’s illustrious Gallery5.

For the last two years Sweet Tease has been fulfilling their name by teasing audiences with short burlesque shows, quick peeks and brief seductive sets.  With such tantilizing talent and wit it was common after such snippets for Sweet Teasers to hear “We must see longer pieces. The sets are too short. We demand more!!!”  In February, they finally gave the audience what they wanted…an evening length performance at Richmond’s Gallery5, and the results were undeniable. Spectators still want more!

Performing with “tassels and torment”, costumed as “thrift shop chic,” and dancing with what Zachary Reid, Richmond Times journalist calls “the kind of show during which you can yell and scream and laugh all you want (while) the performers encourage it”, Sweet Tease Burlesque has been demanded to return to the stage.

Reid’s voice isn’t the only noted one proclaiming the delights of Sweet Tease.  Sue Gardner, aka RunAround Sue, New York and Richmond’s burlesque scene mover and shaker calls Lore an extravagant performance “with numbers crafted with strong characters and cheeky perspectives which they then dress up in well choreographed pieces and offer up as a innovative take on the old bump and grind.” And in the words of Amanda Robinson, Executive Director of Gallery5, Sweet Tease is “the best visual performance to happen on the Gallery5 stage!”

Lore is the comprised of  a whopping 15 burlesque works fired and forged into one long folktale. This production, whose craft reaches above and beyond the title “burlesque”, is crafted with hints of modern dance, performance art, miming, and circus spectacle. To say it has been time consuming, tedious, mind blowing, delightfully fun, and hard work is just the half of it.  Keeping the audience on its feet, the show quite literally travels viewers through a dream world traversing the gallery’s rooms, with surprise entrances, exits, and unexpected performance spaces. Lore will be returning to the Gallery5 stage May 14th through 16th. It is suggested that audiences wanting entry be at the doors by 7:30. The show beings at 8pm. Tickets are $15 and is only for those ages 18 and up.  Audience members are asked to bring a pillow for their seating comfort.

As for the company, Sweet Tease Burlesque is a locally grown cooperative of like-minded performers interested in making art accessible and fun while exploring the boundaries of sensuality. The five company members all travel the path of obsession with the stage. Each, holding a degree in dance and choreography, has shared part the creation of this performance and thus prefer to be entitled directors, choreographers, and/or visionaries. On stage they are called Mis Story, The Muse, Eros Graffiti, Le Loup, and Spiked Punch. Their skill in movement, choreography, wit, sound, production, set design, costume creation, and painting have smashed together to create this magical performance experience, Lore. For this show they have invited four other special guest performers to spice up the stage including the hoofed, horned sex god, Pan.   Mastering sound for the show is Richmond Party Liberation Front’s phenomenal DJ Reinhold, who is flanked by Reef Clem, lighting designer extraordinaire.