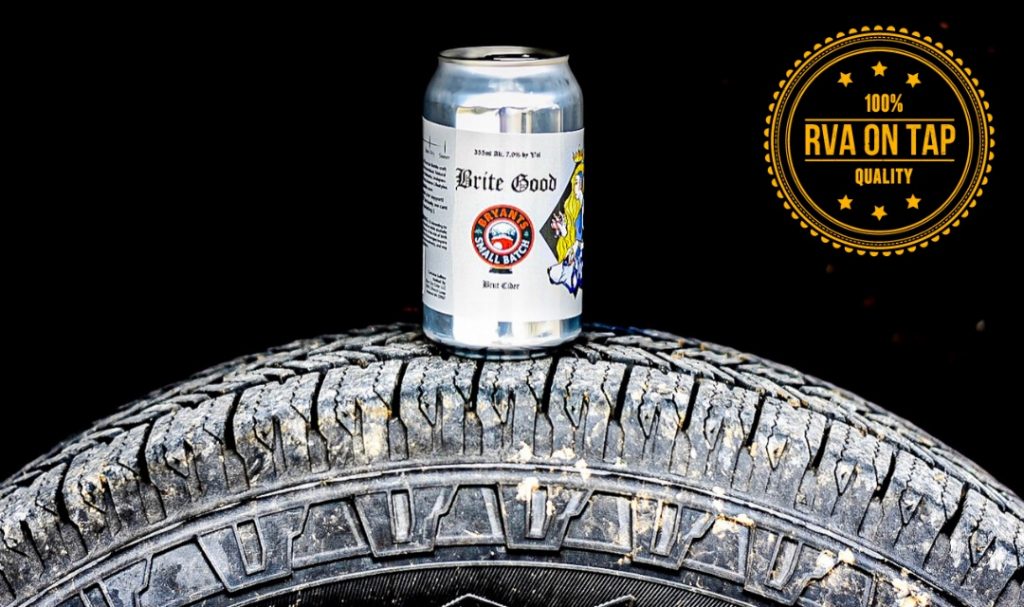 This week, the beloved Bryant’s Cider announces their brand-new spot downtown, with all the charm of their family orchard origins. Hardywood kicks off four new releases this Friday and Saturday, and Last Broadcast DIPA returns to Triple Crossing Beer.

Kicking off this week’s Booze News, the governor recently announced a new location and production facility for Bryant’s Cider in Richmond. You may already recognize Bryant’s from their famous Unicorn Fuel brew, which quickly became popular with its first release.

Now the family farm is bringing a piece of itself into downtown, and we’re excited for the new spot. Bryant’s has been long-loved by the craft beer and cider family since its original opening. The fresh space will be located in a revitalized historic Shockoe Bottom building, and according to owner Jerry Thompson, they plan to create an experience that “you won’t be able to find anywhere else in the city.” With their newfound production space, they’ll be able to partner with local artisans and collaborate with more local businesses.

This family-owned cidery comes with a warm welcome from Richmonders, and here at RVA Magazine, we’re especially glad to see the growth of independent business like ourselves in our beloved hometown. Bryant’s Cider currently operates on their sixth-generation family orchard, and as an added bonus, they’re even planting apple trees on the site, in true Bryant’s fashion.

Congratulations to Bryant’s! We can’t wait to check it out. Stay tuned with RVA On Tap for more updates, and come see the new location after its soft opening on March 14, along with some brand-new special releases.

It’s going to be a big weekend for Hardywood. Our buds at the brewery have four releases lined up for this Friday and Saturday, starting off with Nona’s Biscotti coming out in cans to begin.

Nona’s Biscotti is the #FreshCanFriday feature this week, and this Tuscan old country-inspired recipe is Hardywood’s tribute to the twice-baked cookie family favorite. With a blend of almond and walnut nuttiness, the ingredients of this brew perfectly complement each other. You’ll catch zhuzhed up vanilla, milk sugar, and toasted coconut, along with a touch of anise, in this one — and at 9.5% ABV, one can will get your weekend going right from the beginning.

As Hardywood says, “From our famiglia to yours, cent’anni!”

On Friday, they’ve also got their Richmond Lager draft release. This one is well-known for its River City-themed mini bottles, and the city’s favorite lager is finally coming out on draft. Friday night will include plenty of celebrations, with giveaways along with live music from Andrew Alli and Josh Small.

On Saturday, look out for Hopkeeper and Bourbon Cru. Hopkeeper comes to us from Virginia-grown malt from Williamsburg’s Copper Fox Distillery, and this Double IPA has flavors like juicy pineapple, fresh orange zest, and citrus fruit along with its Virginia Honey additions. Bourbon Cru is on the other end of the spectrum, with a “rich mahogany hue.” This one has tastes like almond, toffee, oaky vanilla, and caramel, with notes of dark cherries and raisins.

This Friday brings the first return of Last Broadcast in 2020 at Triple Crossing Beer in Fulton.

At 8% ABV, this Double IPA hits perfectly on the alcohol scale, and there’s even more perfection to this brew: it combines soft apricot peach flavors with candied grapefruit dank, plus floral green pineapple citrus. Could that sound any better?

Last Broadcast DIPA came together with hops like Mosaic, Nelson, Citra, and Galaxy, with great flavor complements from each individual addition. As Triple Crossing notes, this perfectly-balanced recipe was created to cohesively pull together that softness that’s widely sought by Double IPA fans.

Man, this is a good one. Our buds at Ardent Craft Ales came together with Alewerks Brewing Company to create the Honest Admiration Imperial Stout: a stout that’s big, bold, and brewed to reflect the mutual sentiment between these breweries.

Honest Admiration is not only wholesome, it’s delicious. These Caribbean-inspired flavors include a cinnamon aroma, unrefined cane sugar blended with vanilla, nutmeg, allspice, cinnamon, and peppers. It’s right in between sweet and spicy, and it brings out the best of both. At 10.6% ABV, it’s in an average range for stouts, and it’s higher on the IBU scale at 40 for those who want to taste the bitterness in their hops.

With a moderate sweetness and varied spices, this “intricately-layered” stout balances it all.

Over the weekend at Fine Creek Brewing Company, the English Pub Ale came out for their Friday Beer Feature.

This 6% ABV Pub Ale is reminiscent of the atmosphere at Fine Creek, with a homey ambiance and pub-like vibe that “evokes the older traditions of taverns and public houses,” as Fine Creek says. When they created the English Pub Ale, they combined English ingredients with an American yeast strain to brew up something to embrace their location’s feel.

Its malts come from the Murphy & Rude Malting Co. with malts like Biscuit and Brown, and it blends with English Milds and Bitters. With tastes like graham cracker, toasted bread, and biscuits, English Pub Ale’s full body also features mild citrus characters along with peach and apricot yeast esters.

Come out to grab a glass at Fine Creek while it lasts, and find a little piece of the UK right outside the River City.

Weekly Multi-Release at The Veil

The Veil Brewing Co. is at it again with a wide list of beer releases this week, and you can catch all these beauties now at the brewery. Tefnut (Berry Blaster) kicks things off for us, and this collaboration with Omnipollo is a fresh variation of their original Tefnut. This one comes to us with blueberry, blackberry, raspberry, boysenberry, and strawberry puree to fully live up to its name.

The Berry Blaster is a cosmic Imperial Gose, and at 11% ABV with this deep red pour (pictured above), you won’t want to miss a taste of it. Its brewers wanted to reimagine what a fruit beer can be, and with new processes and fruit volumes, they have definitely accomplished that task.

Never Never Lucky Lucky comes next, as a St. Paddy’s Day-inspired Gose brewed with double kiwi puree. In The Veil’s true fashion, its double name comes as a double version of their original Never Lucky, and with salt and lemon balances, you’ll catch bold kiwi tastes in this one at 5.1% ABV (so you can enjoy more than one for the holiday — which we know you will).

Crucial Taunt³ comes on the heels of The Veil’s original Crucial Taunt, but this one packs a big flavor punch from its triple dry-hopped process. At 8% ABV, candied orange and pineapple are the dominating tastes in this brew, and its Citra-forward notes showcase the best from this hop addition.

HMU is an 8.5% Double IPA, and after a few of these, “hit me up” is exactly what you’ll be saying to everyone at the bar. Brewed with El Dorado, BRU-1, Enigma, Simcoe, Kohatu, and Citra hops, HMU brings together a big combination of hop additions for a balanced taste. You’ll find notes like canned pineapple, lychee, and pungent mango in this one, with impressions of a freshly-opened bag of hops.

Gladiola Pumpernickel closes out our releases from The Veil this week. This open-fermented Hefeweizen is unlike many of the other recipes of theirs on the roster, and it was fermented at higher temperatures than Braühaüsenweisse, according to its brewers. At 5.4% ABV, it was dry-hopped with Hallertau Mittelfruh hops straight out of Germany, and it’s got notes from floral to earthy… and as The Veil says, it tastes like “taking a spin on a hay-ride through a field of flowers with your grandma on a nice spring afternoon.” And oh, what I would give to teleport to a moment like that.

More St. Paddy’s Day celebrations are coming up at Midnight Brewery with their party coming up this Saturday.

If you’re looking for an occasion to drive out of town, this is a great one. Midnight is located out in Rockville near Hanover and Goochland County, and they’re celebrating big this holiday. Come out to catch live music from Elana Lisa & the Hot Mess, plus River City Wood Fire Pizza to satisfy all your cheesy, wood-fired cravings.

Midnight is also releasing their Jack McStout beer for the occasion, and according to the brewers, rumor has it that big Jack is making an appearance — so whether you’re a fan from Richmond or a regular at the Rockville brewery, it’s one for the calendar.

Where the yogis at? Tonight at Intermission Beer Company, you don’t have to say “Namaste” after a long session of downward dogs and sun salutations — you can get all the great, earthy feelings from working with plants.

For Plant Nite, Intermission is bringing out Kat Hemphill to help attendees make their own custom terrariums (no green thumb or trips to the garden store required, they say). Terrarium-making has become a popular hobby for folks in the River City over the last few years, with workshops popping up around town, friends hosting plant parties at their houses, and even PlantBar RVA opening up in The Fan for full-time plant crafting opportunities.

Now you can try your hand alongside your favorite craft beers at Intermission, and head down to the brewery tonight to learn from Hemphill’s talents. Make your own to bring home, and grab tickets here ahead of time if you plan to attend. May the ferns be with you!