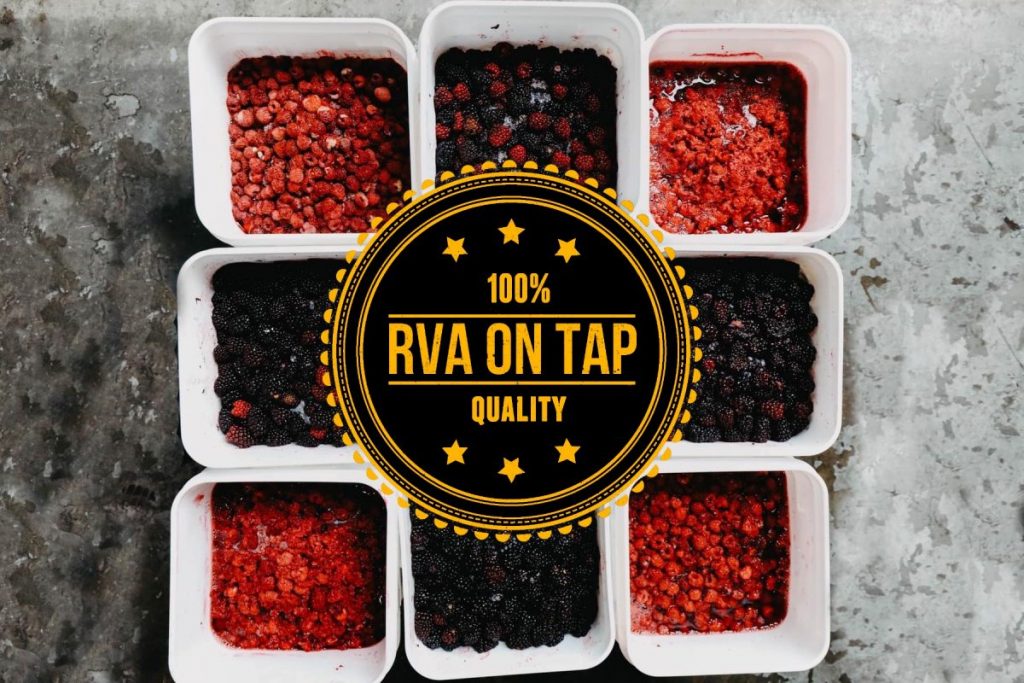 St. Patrick’s Day gears up with celebrations at Center of the Universe and Hardywood Park Craft Brewery’s Shamrock Shindig and Run, with some extra-awesome food trucks like Grandpa Eddie’s Alabama Ribs & BBQ at COTU on Saturday. Fine Creek has a great new earthy release, and The Veil Brewing Co. drops another delicious multi-release this week — plus Väsen teams up with the local Pink Boots Society for an International Women’s Day collab brew.

It’s that time of year again: St. Patrick’s Day is right around the corner, which means many of our favorite brewers are gearing up for the annual celebrations.

A favorite of ours is the annual St. Paddy’s Day Party at Center of the Universe Brewing that benefits the St. Baldrick’s Foundation — an organization that, for twenty years now, has been providing life-saving research on children’s cancer to the community. Our pals at COTU are big on nonprofit benefits, and this yearly event is a staple at the brewery every spring.

The event will feature a delicious brew, the Oatmeal Raisin Cookie Porter, returning for the occasion with plenty of vanilla, cinnamon, and cookie-inspired flavors. At 6.5% ABV, it’s a nice medium on the alcohol scale, and it was their first satellite-brewed beer to be released in four-packs of 16oz cans. Oatmeal Raisin Cookie Porter came together with Maris Otter, Flaked Oats and Barley, Carafa 3 Dehusked, Crystal 90, and double-roasted Crystal Malts.

Its return comes with live music all day at the brewery for their St. Paddy’s Day Party, with bands like Gift Horse, The Royal We, Flashlight Tag, Something Shiny Band, and Pizza Scissors. You’ll want to show up early if you plan to catch all the jams, because live music goes all the way from noon to 9:30pm. Along with a full day of shows, they’ll have food from Two Kings Concessions, Freekin’ Rican, and…. drumroll, please… GRANDPA EDDIE’S! My favorite food truck of all the food trucks! Grandpa Eddie’s Alabama Ribs & BBQ is an absolute must-try, and I go on about it constantly when it pops up in this column, but that should be an indicator for you that you’re seriously missing out if you haven’t tried it. Trust me, this event is one for the calendar!

The latest beer crawl is coming to Richmond’s booziest neighborhood this Saturday, with the Scott’s Addition Beverage District Collab Crawl.

What makes this beer crawl different from others is that all participating breweries came together for collaborations — each brewery was randomly assigned a collab partner on the list, and over the last few weeks, they’ve all created their perfect recipes. They’re all going to be on deck starting this Saturday at 12pm, and the Scott’s Addition Beverage District wants to remind folks that many of these brews will be available for one day only.

All locations will have Collab Crawl Cards available, so be sure to grab one at your first stop. The crawl includes plenty of raffles and prizes, so the more stamps you collect at various breweries, the better! You’ll get a chance to win lots of great prizes and taste some of Scott’s Addition freshest beer.

Collaboration Nation kicks off our new beer releases this week, a Blackberry Blonde ale that came together with additives like fresh blackberry puree and German noble varieties. At 4.5% ABV, this easy-drinking recipe pours as a light-bodied, golden Blonde Ale.

Tour de Obst comes in a bit lower, with a 3.8% ABV and an extra-low 5 IBU — which means it’s the perfect place to kick off your beer crawl to get in the drinking mood without overdoing it at your first stop. This Strawberry and Apple Radler was inspired by traditional German Radlers, according to the breweries, which started off as beer mixed with lemonade to meet the demand of light beers among cyclists.

Three Notch’d and Isley knew that a neighborhood-wide beer crawl would bring a similar demand, so they began their process brewing up Tour de Obst. It’ll be available this Saturday while supplies last, so swing by during the crawl for a glass.

Another great release coming up at this weekend’s beer crawl is one between Ardent Craft Ales and Väsen Brewing Company: Eldig.

This Baltic Porter hits in at a higher 8.5% ABV, so it’ll make a great stop for a taste after Isley and Three Notch’d. With flavors like toffee, caramel, and dark chocolate, this brew brings out a roasted malt aroma to complement its sweet and earthy tastes. It’s full-bodied and cold-lagered, according to its brewers, and its name is especially unique: with Väsen’s Scandanavian roots, they landed on Eldig by translating “Ardent” to Swedish.

As they say, this brew embodies “the Swedish spirit of ‘Lagom’ — perfect balance.”

Cat Nap starts off our releases from The Veil Brewing Co. this week, and with some of the cutest cans we’ve seen, it’s one you’ll definitely want to take home. Thankfully, you can, because this IPA is available in four-packs to go. With flavors like sweet pineapple, musky papaya, tangerine, fruit snacks, passionfruit, and berries, Cat Nap combines a large array of tropical flavors into one IPA. According to The Veil, it’s a smaller sibling to their Dirt Nap brew, and it hits in at a nice medium 6% ABV.

Broz Night Out, in title, sounds like the opposite of a cat nap — but as packed as it is with tropical fruits, these two are more alike than you’d expect. This 100 percent Citra-brewed Double IPA is right up my alley, with intense flavors of mango, juicy pineapple, white peach, and grapefruit at a perfect DIPA 8% ABV.

Cold Blue is another fresh DIPA at the brewery, and it’s making its debut in cans with several combinations in its brewing process. This one came together with Citra and Experimental Hop HBC586, and it brings out flavors like lychee, pineapple juice, and mango.

Last but certainly not least, Coalesce closes out our releases from The Veil this week. This Czech-style Pilsner is unlike the rest in this batch, but it still pours with the bright, vibrant colors we’ve come to love at the brewery. With no limit on to-go packs, you’ll be able to bring as many of these home as you’d like. It comes in at 5.5% ABV for a lower alcohol content, and it was conditioned extensively in The Veil’s horizontal lager tanks for a crisp taste with “just enough Czech Saaz character.”

Hardywood’s annual Shamrock Run 5k is coming back this Sunday, and they’re celebrating its completion with a big St. Patrick’s Day bash. If you’re ready to gear up for the holiday, our local brewers have you covered — after COTU’s celebration on Saturday, you can keep the party going with Hardywood at their downtown location.

Artists like Church Hill Music Co. and The Fighting Jamesons are coming out to keep the music going all day long, and Irish Dancing will gear up during the break between bands. The brewery’s also bringing out traditional Irish fare along with several food trucks, plus photo booths and Irish-inspired vendors.

If you join in for the 5k, Hardywood says dress to impress: they’ll be giving out Best Dressed prizes to racers, along with a glass, finisher’s medal, beverage tickets, and age group awards to their participants. Come out to the brewery on Saturday from 1:30-4pm to pick up your race packet, or swing by early on the day of the event at 11:30am. Good luck, and happy racing!

This Friday at Väsen Brewing Company, the local Pink Boots Society chapter is teaming up with the brewery to make a brand-new collaborative brew.

International Women’s Day is coming up on Sunday, so the groups are coming together ahead of time to make something extra-special for it. The beer will be a Kettle Sour, and with the 2020 PBS Hop Blend, it’ll also have unique tastes from raspberry and pink Himalayan sea salt additions. They’ve invited all PBS members and female-identifying employees of local breweries to come out and create it together, so if you fall into either of those categories, here’s your chance to brew up something great with your local beer family.

To join in, head over to the brewery at 9am and plan to stick around until 3-4pm. They’ll also have breakfast and snacks out for everyone, and attendees are invited to bring beers and snacks to enjoy while brewing.

This Friday Beer Feature is full of some delicious combinations of flavors, and at 5.8% ABV, it’s another nice easy drinker for the week. With Malted Triticale from Epiphany Craft Malt, and Malted Oats from the Riverbend Malt House, this brew has a “pleasant tannic character” to complement its chamomile, dried hay, and damp soil flavors. It would stand as a great earthy recipe with those alone, but they went the extra mile by adding in local buckwheat honey from Mountain House Apiaries. This mono-floral honey gives the recipe flavors of molasses and rich malty notes, and the fermenting of its sugar makes for a perfect combination with its earthy characters.

If you’re ready to grab a glass, head out to Fine Creek and enjoy the tastes of nature while soaking it all in at the farmhouse brewery.