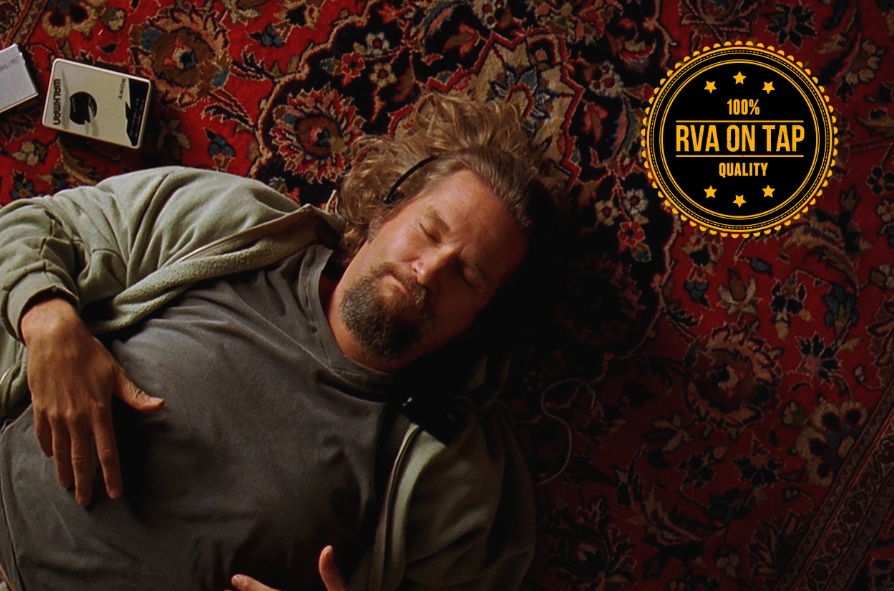 If you missed the last column, you can check that out here. Our kegs are overflowing this week with beer releases and festivals, events, and other cool happenings around town, so hold on to your mugs!

This week, we’re celebrating the 8th birthday of Hardywood along with some very special releases in town — like Stone Brewing Richmond’s “JägerBastard” and The Big Lebowski-insired El Duderino at Center of the Universe.

Happy Birthday, Hardywood! Our long-time Richmond loves are celebrating their 8th anniversary this Saturday, and the Totally Boss Anniversary Bash is bringing the 80s back to the River City with their all-day party for the occasion.

For celebratory beer, they’ll be releasing their 8th Anniversary Blend as an eight-barrel mash-up, which brings together a “totally tubular” combination of flavors like sweet cherries, dates, candied apples, and a subtle oak aura. In its finish, the new brew has notes of caramel, leather, and chocolate, leaving a lingering silky-smooth taste. Another special thing to note: in its combination of eight barrels, this beer was aged for a total of 58 months, so it’s bringing out flavors originally from 2015. Can you remember what your favorite things were in 2015? I can, and I can tell you that caramel and apples were definitely on that list.

In entertainment, Hardywood’s hosting DawnStar Games for retro video games, 80s-themed photo booths for the stylin’ and the profilin’, guest taps from breweries all around town, costume contest prizes, retro board games, Virtual Reality experiences with Richmond VR, and of course, live music! The Vertigos, Gambles Hill Gang, and 64 Crayons Band are all coming out to play through the day. So if you’re looking for a new (old) brew or just a reason to get dressed up, Hardywood’s got you covered.

Can we say yum? Or, maybe — for those of you who have had a little too much Jägermeister fun in the past — you’d rather say “no, thanks.” But in this beer column we love licorice, and we’re stoked for the new Stone Brewing release.

The classic Arrogant Bastard Ale is here in a new Jägermeister variation, and like Stone says, these two names both elicit adoration “by a worthy few.” These unapologetic drinks are either a hard yes or a hard no for most of us, and I’m glad to say I’m on the yes side of that equation.

Before what I’m now referring to as JägerBastard, the closest thing we could find in Richmond to a Jäger-infused drink that didn’t feel so liquor-ey is what I call YerbaJäger at Cobra Cabana. Liquor is, across the board, one of my least favorite things, but I can’t deny my love for that dark licorice taste. YerbaJäger is one of my fav drinks at CC, where they take their authentic imported Yerba Mate and mix it with Jäger (and it’s *surprisingly* good).

Now that the JägerBastard is here, I’ve got something new to try. This recipe from Stone Brewing was brewed and imported from their Berlin location, and according to the brewers, it’s perfect for sipping on fall evenings and pairing with a fine meal — or giving as a gift to any “true appreciator of liquid arrogance and independence.”

It definitely takes some arrogance to get this one down the hatch. Godspeed, y’all.

It’s that glorious time of year again when The Big Lebowski somehow makes its way into every facet of Richmond culture, and I’m here for it.

The Dude returns! El Duderino is heading back to Center of the Universe, and this White Russian-inspired Stout is every bit as delicious as the traditional mixed drink. This brew was pulled together from eight different malts, along with vanilla beans to bring out the realest flavors of chocolate and espresso with a tan, creamy, and pillowy head.

El Duderino dropped last year shortly before the Carytown Big Lebowski bar crawl, where I delightfully got to witness a crowd of people walking the streets in their bathrobes and pouring into New York Deli to clear them out of all the El Duderino they could drink. Thankfully, I got a taste of my own just in time — and I can definitely recommend it highly.

It’s lager time! Lager Day is coming to Triple Crossing Beer this Saturday from 12-8pm, full of recipes both old and new. At their spot in Fulton, Triple Crossing is serving up the lager love with brews like Tiny Pils, Pathway Pils, Hiltop, Festbier (in perfect timing for this month!), Czech Dark, and Cinder Rauchbier.

If you remember from last week, Czech Dark just recently dropped in all its late-fall flavored glory, with a toasted, dry, roast-forward finish and hints of red tones to round off this extra-dark brew. It’ll be up on the taps for Lager Day, and all lagers throughout the day will be served in the brewery’s exclusive German glassware that you’ll get to take home with you afterward. On the eats side of things, they’ll have Postbellum’s soft pretzels served with beer mustard and pimento cheese, along with their pizza kitchen menu.

Pour and Pasties is back at Strangeways Brewing, and this one’s always a crowd favorite. Head out to the Dabney Rd location this Friday evening for brewery burlesque and all the beautiful entertainment you can take, with a full evening of performances and a great cast.

Performers this time around will include Venessa Chevelle, Nyx Nebulae, Bert Shaffer, Scarlet Starlet, Murphy Lawless, Sally Stardust, and their host Ego Von Hubris. The event is thrown by Strangeways in collaboration with Burlesque Right Meow, which hosts shows all around town with an especially awesome effort for inclusivity. Their feminist-forward principles bring in body types of all identities, shapes, and sizes, and they’re big on celebrating the art of burlesque for everyone to enjoy.

Last night at The Veil Brewing Co., another multi-release went down with four new brews for the people of Richmond.

whitebugatti, pictured above, is a Triple IPA hopped “luxuriously” with Citra and Galaxy hops, brewed with only the freshest available. It hits in at 11% in ABV and 100% in my dreams, and I can only hope I make it to the brewery in time to get a glass of this delicious brew.

The Veil also dropped Mean Everything, a brand-new brew that came together with Citra, Mosaic, Simcoe, and Ekuanot hops in addition to a lot of oats to bring the earthy, fruity flavors all together in a 6% ABV beer. Next came Special Combo #5, and if you’re remembering back to the end of the 90s (and the tunes of my childhood) to the release of “Mambo #5,” you’re not alone. This Double IPA comes in at 9% ABV for a high-but-not-too-high-drink, at least in my book. Push me up to 10% and I need to stop at one brew, so for Special Combo #5, we’ll say cheers to two.

The last release of the night brought Tefnut, an 11% ABV cosmic Imperial Gose that was made as a collaboration with Omnipollo to “reimagine what a fruit beer can be” with new processes and fruit volumes, and plenty of ripe, juicy mango character.

If you haven’t heard the news yet, there’s another opening scheduled for The Veil with another Scott’s Addition addition: a new food hall! They’ll have more than 18 vendors all in one awesome place, with a massive rooftop bar and 25,000 square feet to pack it with all of Richmond’s best — including beer by The Veil, because it wouldn’t truly be a Scott’s Addition collab without them.

Coming up this Friday, Final Gravity Brewing Co. is releasing two new beers inspired by both coasts. The East & West Coast Double Beer Release party goes down all day Friday, with Luminosity and California Dreamin’ both fresh to the taps.

Luminosity is a New England Double IPA (my favorite!) that brings together Multihead, Belma, Cashmere, and Vic Secret hops for a tropical blend that can “brighten your glass like the glow of early morning sun shining through a dewy haze.” With notes of peach, melon, and apricot to top it all off, this one’s right up my alley.

California Dreamin’ is coming back to us in a return; this golden beauty was a crowd favorite that was so loved they decided to bring it back. The 7% ABV beer was made with a combination of Columbus, Simcoe, and Centennial hops to bring out a clean, citrusy flavor with a subtle bite.

A fresh Double IPA is here at Väsen Brewing Company, and like the other DIPAs out this week, it’s a high priority. This dank, fruity brew came out over the weekend at Väsen, and it was appropriately-named Mandarin Galaxy.

The recipe is bold with juicy fruit flavors, brewed with Citra Cyro, Mosaic, Mandarina Bavaria, and Australian Galaxy hops. It’s new in cans and on tap, and it brings Väsen into a bold new universe of hoppy citrus flavors.