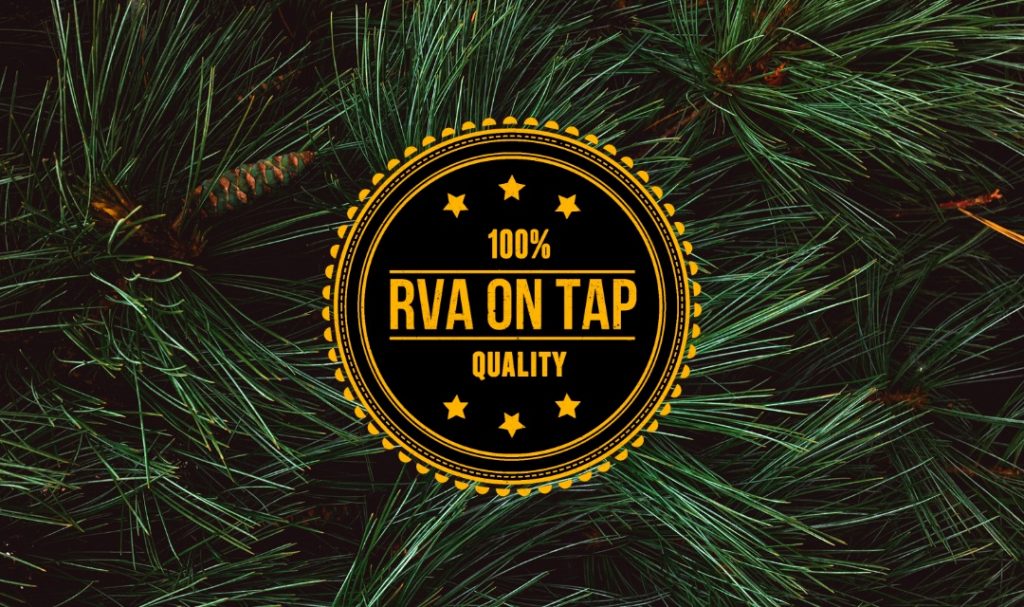 This week, The Veil Brewing Co. drops a seven-beer multi-release with several collabs from brewers around the country. Pine is in the air with new recipes at Hardywood and Fine Creek Brewing Company, and another multi-release starts the year off right at Lickinghole Creek Craft Brewery. Don’t miss Double IPAs and Milk Stouts at Final Gravity Brewing Co., Intermission Beer Company, and Triple Crossing Beer, plus an Apple Brandy Hot Toddy brew at Three Notch’d RVA Collab House.

The Veil Brewing Co. is back with another big release this week, and it brought us seven new varieties both on tap and returning in bottles. Cognac Circle of Wolves (pictured above) kicks it off for us, and the English-style Barleywine came out in bottles after aging in French Cognac barrels for two years. It has a high 14% ABV, so this one’s not for the lighthearted — but with raisins soaked in cognac, fine amaro, hard caramel candy, and chocolate-covered fig flavors, it’ll be very worth it to all those who can take its higher alcohol percentage.

Buggie Nuggie came out for the first time, as a brand-new West Coast DIPA. This one came together with Citra, Mosaic, Simcoe, and Enigma hops in its brewing process, with Monkish Brewing as a collab beer. You’ll find tropical juicy hops, subtle bitterness, and a pine-flavored finish in this 8% ABV brew.

Never Never Goaway Goaway also made its debut. This Gose pours thick with its double açaí, double blackberry, and double passionfruit additions, and the 5% ABV recipe “tastes like you’re on a tropical oasis” eating a frozen smoothie bowl, according to its brewers.

Petalz Raspberry came out as a collab with Jester King Brewery, and it’s another Mixed Fermie™ variation from The Veil. It was first brewed two years ago this month, and the 5% ABV recipe brings Texas raw wheat, Virginia corn grits, spelt, and aged whole leaf hops into the mix. The Petalz series has a few different variations now, and the brewers report that this one is full of the same drinkability and balance of its other versions, but with a bit more tartness.

Open Up and Love Again: Peach + Plum came out in bottles after its original release in August of 2018, so if you’ve been waiting for an opportunity to have this one again, it’s here! Peach and plum are delicious flavors together, and this Mixed Fermie™ is no exception. It was a collab between The Veil and American Solera, Cloudwater Brewing, Monkish Brewing, and TRVE Brewing. It’s another lighter, easy-drinking recipe at 5% ABV.

Strange Strange & Eternal Eternal released in cans, and it’s extra-sweet with flavors like fruit snacks, gushers, and pineapple in the “unique, cool, soft crusher.” The double dry-hopped IPA was brewed with Citra, Mosaic, Motueka, and Simcoe hops for a perfectly-balanced sweet IPA taste.

Melancholia closes out our new releases at The Veil this week. This one is a bit different from the others, as the farmhouse Saison keeps things crisp. Described as “stainless” by its brewers (with a metal-forward can to match), it came back in cans last night with farmhouse phenolics, rye, and spelt grist at 6% ABV.

Sippin on Pine, Not Juice can release at Hardywood

Coming up for this #FreshCanFriday at Hardywood Park Craft Brewery, the tastes of winter are in full swing.

As the colors of the season continue to fade and we’re seeing more pale skies, this time of year makes the deep green of pine trees stand out more than ever — and with forest green as my favorite color, I’m all about it. The crisp, earthy scent makes you want to wrap up by a fire, and its flavors are coming out strong in Hardywood’s latest release.

Sippin’ on Pine, Not Juice is fresh in cans this week, and the 6% ABV IPA is full-bodied. It comes with a dry, bitter finish to complement its light copper color, and as it was inspired by classic West Coast IPAs, this one is “all about the hops.” If you’re planning to swing by for a taste, you can come hungry and ready for its perfect pairing with River City Wood Fire Pizza.

Another pine-forward brew came out this week with Fine Creek Brewing Company’s Winter Pine IPA. Of this recipe, Fine Creek said there’s something about the smell of fresh pine needles that “evokes a sense of crisp winter days and long, cold nights” — and I couldn’t agree more. It brings out the best feelings from the flavor, and this brew came together with Riverbend Malt House Appalachian wheat, along with Virginia & Loblolly pine tips.

At 7% ABV, Winter Pine IPA has a citrus character that pairs with fruity hops for an earthy taste. It finishes with herbal and resiny notes, and it’s available now at Fine Creek to grab a glass of your own.

Lickinghole Creek Craft Brewery is ringing in the new year with three new beers on tap, and they’re kicking it off with the latest from their Juicy IPA series. Each brew from the series has been beloved by its drinkers so far, and the new Juicy #18 Something Chill will go great with the rest of the group.

They’ve also got Fresh Nuclear Nugget and Maidens Blonde Ale ready to start 2020 off right, so if you’re looking for a reason to get out of the city, head out to their beautiful Goochland farm and find your new favorite.

Fresh at Final Gravity Brewing Co. this week is the Star Castle Hazy Double IPA. This one was crafted with Nelson Sauvin and Citra hops, and we’ve been pleasantly surprised at the amount of Nelson Sauvin hop brews we’ve seen so far in the new year. Star Castle infuses grape and tropical flavors to sweeten up these cold winter days, and “pushes the boundaries of fruitiness,” according to its brewers.

A brand-new milk stout is headed to Intermission Beer Company this Saturday with Conjured Darkness, a Shakespeare-inspired beer with some history to go along with it. Intermission reminds us that while Shakespeare’s plays were debuted in outdoor theaters during the day, they were set to take place at night: so the playwright got creative by using speech and action to give the audience feelings of darkness as the plays went on. Conjured Darkness gets its name from that method, conjuring up a darkness of its own in a rich milk stout that still hits in at a lighter 6.4% ABV. With roasted malts and chocolate, milk sugar, and light hops, this recipe is “dark, decadent, and creamy.”

A double release just went down at Triple Crossing Beer in Fulton over the weekend. For a fresh recipe from one of our local favorites, head out to Triple Crossing and get a taste of Dawn Chorus: an 8% ABV Double IPA packed with bright fruits for a citrus, melon, pineapple, and dank undercurrent taste. With its Citra, Vic Secret, and Galaxy hops, Triple Crossing says this recipe keeps with their signature super-soft Double IPA body and feel.

Next up from Triple Crossing was The Grid. Another 8% ABV brew, Triple Crossing brought two of their favorite hops together once again with Mosaic and Falconer’s Flight. The Grid results in bold flavors with sticky mango, passionfruit, apricot, and candied orange slices that come together for a hop-forward fermentation profile.

This Thursday, Three Notch’d RVA Collab House is dropping the perfect warmer for a cold winter night with their new Apple Brandy Hot Toddy. The special release was a collaboration between Three Notch’d and the URSPCS Beer Brewer program with the University of Richmond, a professional brewing certificate course that works with local breweries. The students behind this brew will be in attendance for its release, and many more drinkers outside the program will want a taste of this Amber Ale brewed with honey and lemon, along with its aging process in apple brandy barrels.