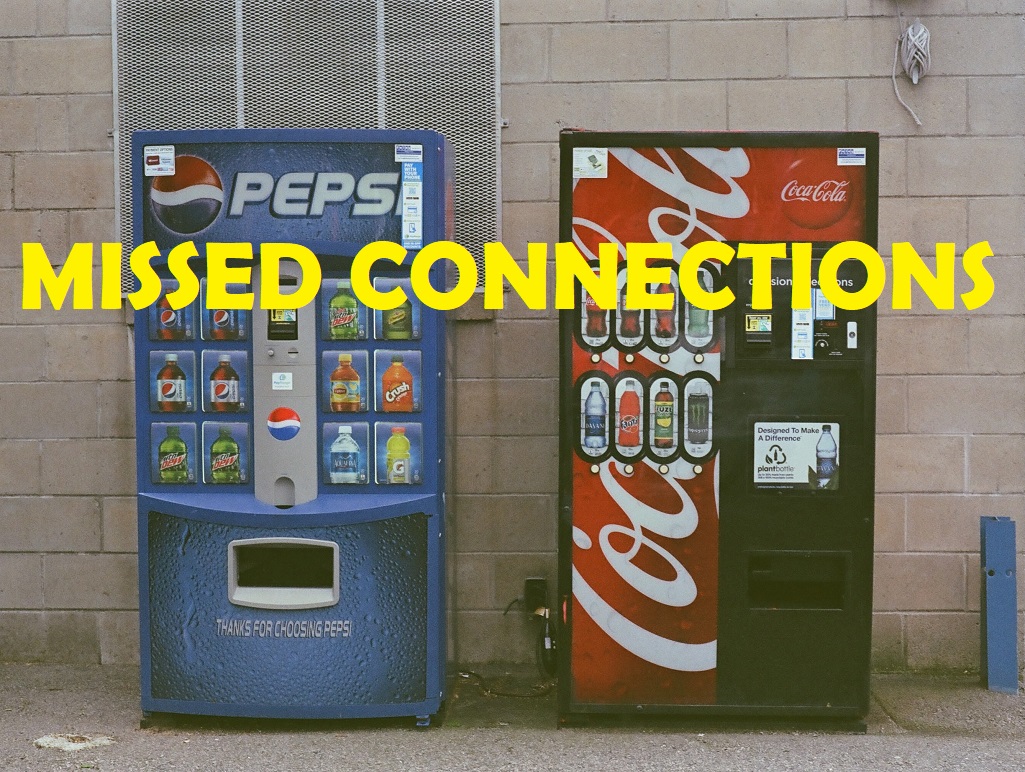 If you still have an opinion about the cola wars of the 80s, you might find a kindred spirit in this week’s Missed Connections. Times have changed, that’s for sure; after all, this week brings us evidence that a dude with face tattoos can get a positive response in the town where I went to high school. Thirty years ago, I was nearly run out of the place for having a mohawk, and now this? Good lord, I’m old.

Enough of that, though. Let’s instead focus on the bonanza of entertainment Craigslist provides us with this week, from little black dresses worn in debatably inappropriate circumstances to the shame of spilling your change at the drive-thru window. We’ve also got lovelorn Cracker Barrel customers, jerks who leave the gym equipment all sweaty after they’re done working out, and guys with long hair and shaved sides — which makes me think the 90s aren’t as far in the rearview as they seem.

Finally, I don’t know what’s up with the recent running theme of people trying to reconnect with brief connections from decades past, but as pointless as it seems to me, I am nonetheless here for it.

Looking for Liza from a party in 1990 (Richmond Virginia)

Okay, this is a long shot but I am looking for a girl named Liza that I met at a party in Cary Town back in 1990. We talked about the Dick Tracy movie (well, I did most of the talking) but we seemed to hit it off really well, but I was young and stupid and never asked her out. I’d just like to know how she’s doing. She was friends with a girl named Chris and the party was Chris’ and Joyce’s apartment near the Byrd Theater. I also ran into Liza at Twisters one night and she kissed me on the cheek. The only other clue that I have is that Liza was probably an intern for The American Historical Foundation Museum in Richmond at that time. To this day I refer to her as “The Dick Tracy Girl” and I think of her often and hope she is doing well. If this sounds familiar to anyone else let me know.

loser not wiping down equipment (vb)

you were using treadmill at like 330 and you left and wiped nothing down, how inconsiderate during a time of a pandemic..

Stopped in to grab a bite around 6 pm and you happened to come over to raise the blind. You were a waitress with black hair and a big ring on you right hand and I noticed your name on your uniform as Alexis. You weren’t my waitress but missed the opportunity to chat with you. If you see this, do you remember me. Erin was my waitress and you spoke about a lantern that you had lit and the customer got upset with you.

Hey cutie with the face full of tattoos. I have seen you around town and I want to know your story. You are very intriguing and sexy and I can’t help thinking about you. Tell me what you drive so I know it’s you. Maybe we can meet up sometime?

To the handsome one in the white sedan~a sharks fan. Thanks for the bux. Made my day. Here I thought I was supposed to be supporting our military. Haha

I could feel some tension between us today. I wanted to act impulsively but I wasn’t sure how you’d respond. Let’s talk more.

Saw you at river ridge mall today. You had on an all black gothic looking outfit and red hair pulled back in a pony tail with shaved sides. You were the sexiest man I’ve seen around. I couldn’t take my eyes off you. If you see this message me id like to know you.

You were wearing a little black dress today at work. I don’t know what possessed you to do that with the cold, nonetheless I enjoyed the view. Over the past couple of weeks, we both have been checking each other out. Yes, I saw you checking out my ass last week at work while I was walking down the hall. It’s extremely hard to approach you at work; therefore, CL. I sense you peruse or have perused CL. I’ll ensure that I drop a hint when we talk.

You… A Beautiful woman… Me… a dumbass… I said something stupid to your friend about you… I really was sorry, did not mean that in the way that you apparently took it… I should have offered to buy you a drink… dinner… a new car! Wish I knew your name, but didn’t have the chance to get it… Can’t stop thinking about you!

To the young lady at the KFC/TB drive thru window about 12:30 today…you are really cute if no one ever told you that before. How old are you? I fumbled my change in case you recall.